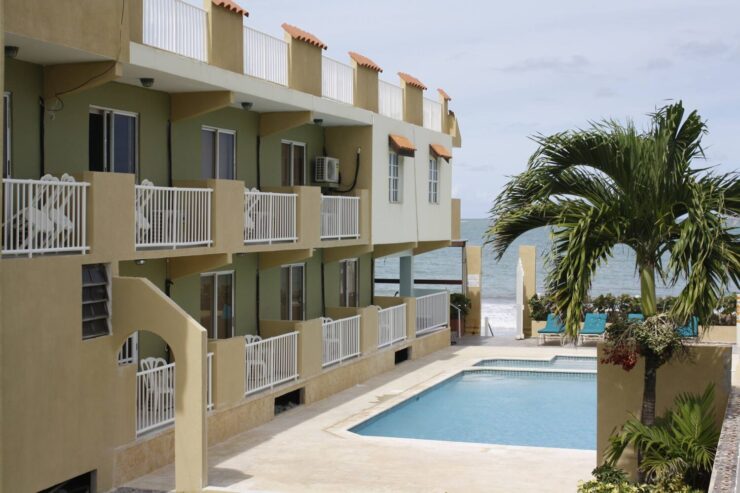 Hotel Yunque Mar started out in 2004, and in July 2013 was admitted to the Paradores de Puerto Rico Association.

One of Yunque Mar’s characteristic attributes is their location on Luquillo’s Fortuna Beach, close to the main attractions of the eastern portion of the island. Parador Yunque Mar offers spectacular ocean views from its ample terrace, and the steady sound of the waves is simply unrivaled.

They are also known for the politeness of their staff and the people who live in their community. Yunque Mar is a family corporation operated by the Ferrer Family, pillars of the Luquillo community.

The hotel has 15 ample double guestrooms, including two family bedrooms that can accommodate four people and two suites for up to six guests. They recently made improvements to the pool area in order to offer a safer environment, larger rest areas, and increased privacy for their clients. The Parador has a multi¬purpose room that can accommodate 100 guests and is ideal for weddings, banquets, meetings, and seminars.

Parador Yunque Mar is just 15 minutes from El Portal del Yunque, 35 minutes from the ferries that take visitors to the islands of Culebra and Vieques, and a mere 10 minutes from the acclaimed Luquillo Public Beach and the area’s popular food kiosks where there are many restaurants serving local and international specialties.

Guests that visit this hotel say they visit because they are close to eastern Puerto Rico’s main area attractions, have direct access to the beach, have a pool that is practically next to the sea, for their attentive service to both local and international visitors at reasonable prices, and for stays that include breakfast, complimentary Wi-Fi service, and free parking.

Located in the heart of the North Eastern corner of Puerto Rico, Hotel Yunque Mar boasts a spectacular view of the famous sandy beaches of Luquillo framed by palm trees and the blue waters of the Atlantic Ocean. The newly renovated pool is located in front of the ocean, offering a chance to cool down in fresh water. Accommodations include 15 spacious, air-conditioned rooms, showers,

Breakfast is enjoyed by the guests on the oceanfront terrace featuring a front-row seat to the beautiful Atlantic Ocean accentuated by the brilliant colors of the sunrise.

Yunque Mar is an Ocean Side property. Solidly Built along the shore of the Atlantic, Yunque Mar boasts of beautiful ocean and beach views. However, throughout the year, the ocean changes. In the summer it is calm and pristine, and during the winter months, it gets rougher. This is common throughout the island. In this sense, during the summer, the Yunque Mar enjoys a beautiful sandy beach right off their terrace.

However, as the winter approaches, so the waters of the Atlantic advance onto the walls of the Yunque Mar. It is pertinent to visitors to understand this when making their reservations at the hotel. Many people love the sounds of the ocean waves and looking across the endless expanses of water. Others are more focused on a beach experience. To those, we urge to come in the Summer!